History of the Internet – How it all began?

Home Broadband History of the Internet – How it all began? 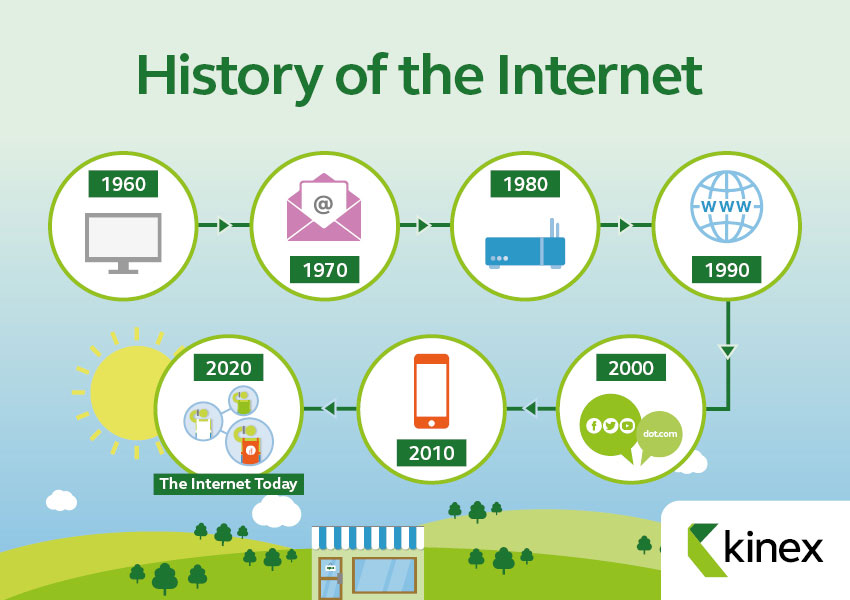 History of the Internet – How it all began?

It’s International Internet Day, and if you’re curious about how we ended up in a world where billions of devices are all interconnected through what we call the internet, then you’re in the right place. Thanks to the internet, you are reading this blog post right now, but how did the internet become what it is today?

The very first beginnings of our modern internet can be traced back to the 1960s. In 1969, there was a turning point in the fields of both computer science and communication. The Advanced Research Project Agency (ARPA) developed the first integrated computer network known as the ARPANET.

In 1963, the first message was sent between two computers, one at Stanford and the other at UCLA (a distance of around 350 miles), by Professor Leonard Kleinrock. The message was intended to be the word ‘login’, but the system crashed after the letters ‘L’ and ‘O’ appeared on the Stanford monitor. A second attempt proved more successful, leading to further messages being sent between the two computers.

The very first person to send an email was Ray Tomlinson way back in 1971. In order to send an email to somebody else on a different computer you needed to know that person’s name and what computer they were on. You separated these two pieces of information by using the @ symbol – something that we still use to this day. What was a remarkable invention back then is now a standard aspect of our digital environment.

Commercial use of the internet

The first version of the internet available for commercial use was dial-up. During the 1980s, internet was accessible through telephone lines and modems – it’s interesting to note that during this time you couldn’t use the phone and internet at the same time. The speed of the internet was a critical issue and by 1998, the best connection users could expect was 56Kbps. Downloading a HD movie at this speed would have been a time-consuming process and would of took hours for the download to be complete. This all changed when broadband was first introduced by John Cioffi, who realised that the copper wires used to deliver voice calls into homes could also be used to supply high-speed data.

In 1990, Tim Berners-Lee invented HTML and URL, which led to the creation of the world wide web, providing a platform for different networks of connected computers to interact with. From this emerged a new wave of internet activity, from Microsoft launching Windows 95 to e-commerce giants Amazon and eBay entering the market.

The rise of the dot-com bubble and social media platforms

During the late 20th century, e-commerce grew and led to the start of many “dot-coms”. Investors were so excited about the progress of the internet that they pretty much invested in any of these companies without a second thought. However, not all investments were successful, and many were highly overvalued, resulting in many companies crashing and investors making significant losses.

The 2000s also saw the start of social media platforms. Myspace was the first mainstream social media site. Launched in 2003, Myspace received more than 75 million unique monthly visitors a month by late 2008. However, two years later Myspace lost popularity and Facebook went on to dominate the social media market for the next decade.

In 2011, it was reported around 12.6% of UK web traffic came from mobile devices. The launch of smartphones was the driving factor in the number of people accessing the internet on mobile phones. Underpinned by 4G, mobile phones have become a portal to a whole world of information and entertainment, capable of downloading text, media, sending emails, or browsing the web.

Computers in the early 1960s were big, clunky machines that were stored in special cooled rooms. Most computers only existed in labs for government research. However, after becoming widely popular in academic and political circles, the internet soon became more accessible to the public.  The internet has come a long way. At the click of a button, we now have the ability to share information across devices and thanks to the introduction of 4G, WiFi and fibre-optic broadband, many of us are more connected than ever. With the recent news of the rollout of Fibre to the Premises (FTTP) to additional locations in the UK, faster and more reliable broadband will be at the forefront of technological developments over the coming decade. FTTP delivers Ultrafast Fibre Broadband using pure fibre optic cables wired directly to your premises. There are no copper wires involved and the direct connection to your premises allows for a consistently faster and more reliable internet connection at all times.

Broadband built for your business

At kinex, we have a great range of broadband packages for you to choose from, including Essential Broadband, Unlimited Broadband and Absolute Fibre. As FTTP continues to deliver Ultrafast Fibre Broadband across the UK, you can choose to upgrade your download speed of up to 1000mbps!

And with our unique One Bill solution, you can combine your essential services. No matter how many services you take from us and properties your business has, you’ll only receive One Bill with a clear breakdown of all your charges.