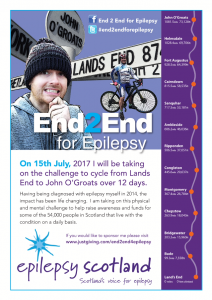 Enthusiastic cyclist and kinex colleague Fraser Beattie, is undertaking a 1,081-mile solo challenge this weekend and is raising funds for Epilepsy Scotland. The feat will require major stamina and commitment as he will be travelling the length of Britain in 12 Days.

In early 2014 Fraser Beattie was diagnosed with epilepsy following his third grand mal seizure. Having had his first at age 16 and his second at 22, he thought that at 34 years old he’d never have to experience a seizure again.

The third seizure hit him psychologically hard, it happened outside of his home. He had to have 3 months off work. He was discharged from the army, rejected by the fire service, rejected by all of the reserve armed forces, lost his driving licence for close to 2 years and he now has to take pills for the rest of his life. He believes that these are things he can live with and that there are others who are much more seriously affected by epilepsy.

He says, “People who have seizures 1, 2, 3 times a day and whose families are in constant fear for their health. 54,000 people in Scotland live with epilepsy and on average 8 people each day are diagnosed with the disease. Anyone can develop this condition at any given time, therefore I am fundraising for Epilepsy Scotland. To raise awareness, healthcare and to end the stigma of epilepsy. “

He continued, “I’d just like to say a massive thank you everyone who has supported me. The local community and my workplace, kinex have been a great source of support. I’ve been so touched and I’m so grateful for all that I’ve received in the last couple of months. This time on Saturday I’ll be well into my first day over the rolling countryside of Cornwall, hoping for good weather!”

Kinex have donated via Fraser’s JustGiving page ( which we hope you will do too!) and we wish him all the luck in the world with his journey across Britain.

We will be following his progress on our social media channels @kinexuk, so make sure to keep up with his progress on our twitter and linkedin pages. You can also have a look at Fraser’s facebook event page here for video updates from the man himself.

For more information on Epilepsy and Epilepsy Scotland click here

If you know of a community group or organisation that are providing invaluable services to improve the quality of life for local people who could benefit from potential funding, please email the Community Support Scheme at: communitysupport@kinex.co.uk